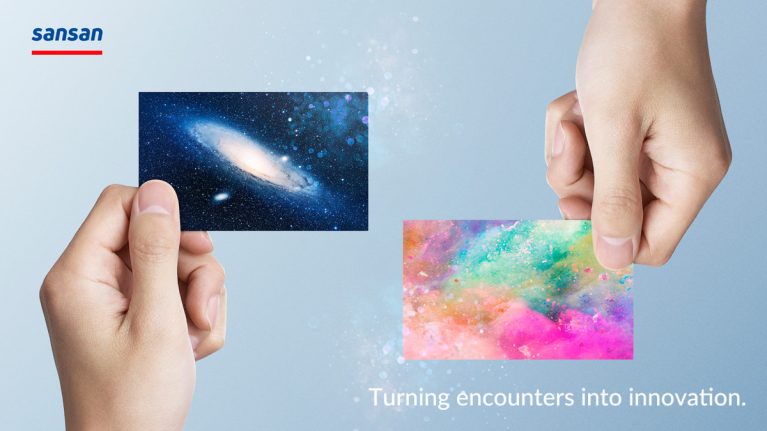 Sansan, Inc. has raised a total of approximately 3 billion yen in capital from Japan Post Capital, T. Rowe Price, SBI Investment, and DCM Ventures. In accordance with this development, Sansan has updated its corporate mission to “Turning encounters into innovation.”

With this funding, the company will accelerate its business of producing innovation originating from business cards.

■Overview of Funding
Since being founded in 2007, Sansan has steadfastly focused on the value of business setting encounters via business cards.

As a cloud-based business card management service for businesses, “Sansan” converts business cards lying dormant within companies into data. It has been recognized for turning connections between people into information that can be visualized and shared. Its services have been deployed by over 7,000 companies, mostly large businesses, and it has achieved growth as part of the business infrastructure of companies.

The business card app “Eight” for individual users is Japan’s largest business platform based on business cards, with over 2 million registered users. “Eight” was also released in India last November, and its expansion both in Japan and overseas is accelerating.

With this series E round of funding, Sansan will accelerate its business growth to fulfill the mission of “producing innovation through encounters” via the combination of fresh data and technology.

With this latest round of funding, the cumulative total of capital raised is now approximately 11.4 billion yen.

Sansan’s business operations are not limited to the digital management of business cards, as they are growing with the aim of producing new encounters that lead to innovation. In conjunction with this business development, Sansan has decided to update its long-held mission.

No matter the era, it has been encounters between people that have driven events. Sansan is changing the nature of encounters that begin with the exchange of business cards.

■About Funding Sources
・Japan Post Capital
Japan Post Capital is a wholly owned subsidiary of Japan Post that is primarily engaged in investing. It supports the growth of Japanese venture businesses by investing in companies that can be expected to grow through utilization of the network and brand power of the Japan Post Group.

・T. Rowe Price
T. Rowe Price is a world-leading independent asset management company based in the U.S. in Maryland. It manages assets totaling over $1 trillion and currently does business in 16 countries worldwide. Since opening a representative office in Japan in 1982, it has long been engaged in managing Japanese stocks.

・SBI Investment
SBI Investment is a subsidiary of SBI Holdings that actively engages in venture capital investment in growth fields. The company participated in this round of funding through the AI & Blockchain fund it manages.

・DCM Ventures
DCM Ventures is a venture capital with over 3 billion dollars invested. We have offices in Silicon Valley, Beijing, Tokyo and support entrepreneurs through practical management advice, global business network and funding.

■About Sansan Inc
Since its founding in 2007, Sansan has focused on delivering its cloud based contact management service to customers in Japan and beyond. Sansan is setting the standard in Japan for cloud-based contact management, with annually doubling numbers of users from over 6,000 premium corporate users including the Japanese Government (METI). Sansan Inc. is based in Tokyo, Japan and has its subsidiary Sansan global Pte. Ltd. in Singapore since October 2015. The company began offering its business card app Eight in 2012. It has over 1.5 million registered users as a new business network that incorporates a social media framework to transform business cards into business connections.